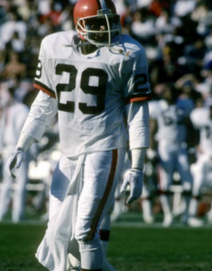 Hanford Dixon (born December 25, 1958) is a former professional American football corner back who played his entire career (1981–1989) for the Cleveland Browns of the NFL.  Dixon made the Pro Bowl three times, in 1986, 1987 and 1988.  He was drafted by the Browns out of the University of Southern Mississippi with the 22nd pick in the first round of the 1981 NFL Draft. He also is credited with naming the Cleveland Browns "Dawg Pound," the section of the stadium known for their antics during Browns home games at the old Municipal Stadium inspired by Dixon's "barking" to teammates, especially fellow corner back Frank Minnifield.

Dixon and Minnifield were selected by NFL.com as the No 2 "Best Cornerback Tandem of All-Time." Dixon has been honored many times by his Alma mater including being inducted into the M-Club Alumni Association Sports Hall of Fame in 1988 and being named to the school's Football Team of the Century. He became the seventh football member of the school's Legends Club joining Reggie Collier, Brett Favre, Ray Guy, Derrick Nix, Sammy Winder and Fred Cook.